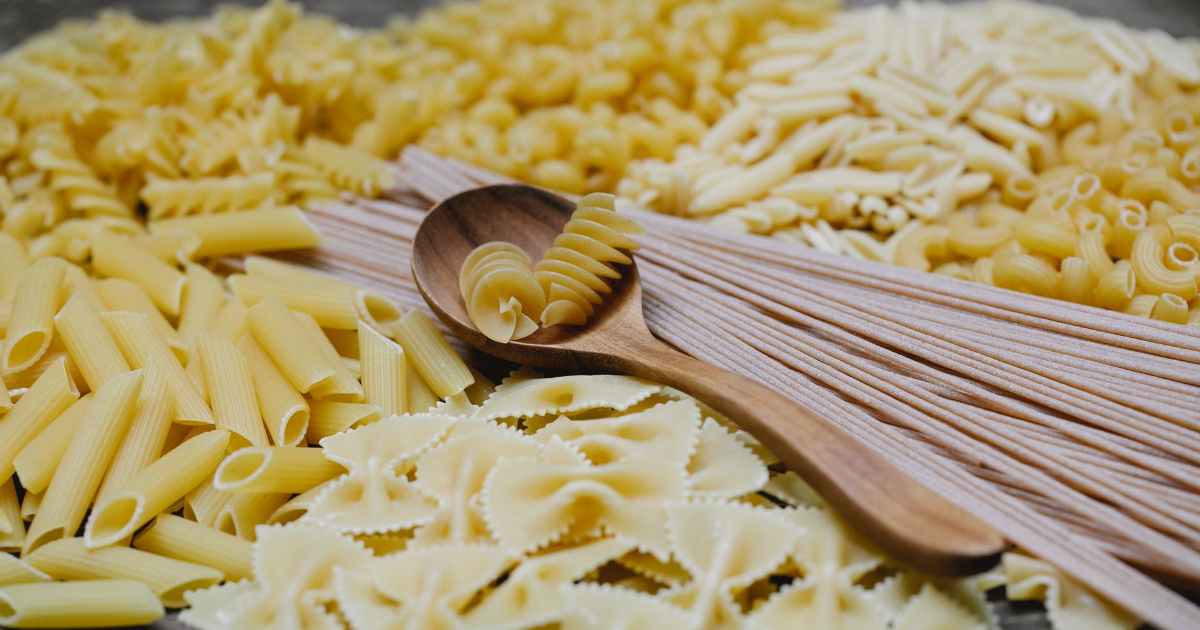 Pasta is one of my all time favorite comfort foods. There are so many ways you can make it – with different sauces, tomato pastes, cheeses, mushrooms etc. There’s nothing better than a creamy, cheesy dish of pasta. While looking for new and exciting pasta recipes, I came across a bunch of different pasta noodles.

I had absolutely no idea that there were so many different kinds of pasta. I’m a huge pasta lover but even I had no idea what was coming – so I decided to list all the different pasta noodles I could find.

I hope you enjoy this pasta-bly one of the best articles on this page! 🙂

Here are the types of long to medium long pasta.

Spaghetti-shaped pasta, but fatter and softer. They are prepared from full-grain flour, sometimes a duck egg is added to the dough.

Thickened spaghetti-type pasta, the middle of which is empty.

A kind of pasta that even those who aren’t fans of it seem to recognize. This is long pasta, wide and twisted around 6.5 millimeters, in a kind of sloppy lump.

This is wide rectangular-shaped pasta that could be translated as a “flat slice of bread.” This is perhaps the oldest of pasta types.

Another version of lasagne, only more narrow and wavy.

Looks like thin strips. Eggs are used to make this type of pasta.

This type of pasta got its name in honor of Princess Mafald of Savoy (France). The pasta is long, rectangular and wavy.

Pasta is made in flat strips, the dough of which is based on eggs.

Very thick, irregularly shaped and long pasta, it is handmade.

Very thin pasta strips, which are made in beef broth.

Undoubtedly a type of pasta that everyone has tasted. They are long and thin cylindrical pasta made up of flour and water.

Rectangular pasta made of eggs and flour. The name comes from the device used to cut the pasta, which resembles a guitar in shape.

This pasta consists of 256 equally fine dough threads that are dried in the sun. It should be noted that this is a very rare type of pasta. Therefore, if you are a hunter of different types of pasta, then finding this one is the right challenge for you.

Long pasta 6.5 to 10 millimeters wide, mixed in a ball. The translation means “cut”.

These are the thinnest version of tagliatelle pasta.

In translation, it means “little worm”. In Italy, this pasta is a little thicker than spaghetti pasta.

Long and narrow pasta, which is usually broken before cooking. In translation, the word means “brides and grooms”.

Here are the types of short pasta I could find.

In appearance, this pasta resembles a wide ring.

Looks like a chef’s hat and literally it means it.

Short pasta with an “s” shape. Translated means “home made”.

Pasta in the shape of a shell, which is translated as “castle dweller”.

Pasta with the shape of a wine corkscrew, which in translation also means exactly that.

Short and longer pasta, which is made in three sizes, usually measured by the fingers.

Small and wide pasta, which can be both straight and curved.

Shell-shaped pasta that is rolled out by hand.

In translation, they mean “butterflies”.

Eggs are used to make their dough and it is formed into a ribbed square, which is then rolled into a tube.

An “S” shaped type of pasta that is twisted into a free spiral shape.

Translated to mean “elbow” and resembles a bent elbow in shape.

The strips of pasta are wrapped twice around three fingers so that they form a ring and then rotated to resemble a rope. This word translates as “small rings”.

Short pasta that is wavy.

Pasta of various shapes, which can be translated as “poorly cut”.

The rolling of this pasta dough is handmade, their shape is a shell.

The design of this pasta was created in 1987, inspired by mandala drawings.

The name could be translated as “from the sea”. This type of pasta was designed in 1983 and looks like an ocean wave.

Visually, they are comparable in form to radiators (old), and this also means it in direct translation. Their shape makes them suitable for dishes consisting of thick consistency sauces.

Short and wide pasta cut at a 90 degree angle.

Pasta whose appearance corresponds to its name – “small wheels”.

According to their size, the name means “small spirals”.

These pasta are named in honor of Mount Vesuvius. They resemble the shape of a corkscrew in appearance.

Here are some types of pasta for soups.

Small pasta in the shape of rings.

Small pasta in the shape of a shell. The name translates as “small shells”.

Short tubular pasta. Their name could be translated as “nozzle” or “thimble”.

Pasta made from flour, eggs and water. In appearance, they are finely long and twisted into lumps or messy, rolled balls.

This type of pasta originated in Sardinia. From the dough form small, round balls about 2-3 millimeters in diameter and bake in the oven.

Flat pasta with a teardrop shape.

Very small pasta, which means “eyes of a partridge”.

Translated to mean “small pasta”. This name also refers to the “family” of all small pasta.

Small and flat pasta with a square shape means “small squares” in translation.

Pasta in the form of small stars.

A smaller version of “elbow pasta”.

And here’s some pasta with fillings.

Semi-round or square pockets that can be filled with ricotta or other cheeses, meat or vegetables. In translation, they mean “angels.”

Large pasta, in the form of a bowl, for filling. Translated from Latin, it means “pot”.

Pasta rolls, which are filled with various fillings, are usually cooked in the oven.

Pieces of square dough filled with minced meat and folded into a triangular shape. This name translates as “hats”.

A type of stuffed pasta that looks like candy and is also translated by the word.

These are types of stuffed pasta and their name probably comes from the word casa or house.

Stuffable pasta, which looks like large shells in shape and is also a translation of the name.

In translation, this word means “snails” and would be visually comparable to snail “houses”.

Triangular pasta, which is not usually filled with meat. In translation, this name means “big belly”.

This popular pasta consists of two pasta squares and is filled with meat, cheese, vegetable purees or a combination of different ingredients.

Another type of stuffed pasta is small square shapes. They are wrapped around the filling and rotated. In translation, the name means “small bags”.

The translation of this word is “little pies”. Fold the square-shaped pasta to form triangles. They are about 30 × 35 millimeters in size. Sweet versions are also available for this type of pasta.

A type of pasta that is stuffed with potatoes.

There’s so many different kinds of pastas that the pastabilities are endless! 🙂

Check out recipes where pasta is included – The best lasagna recipe and Types of pasta sauce.