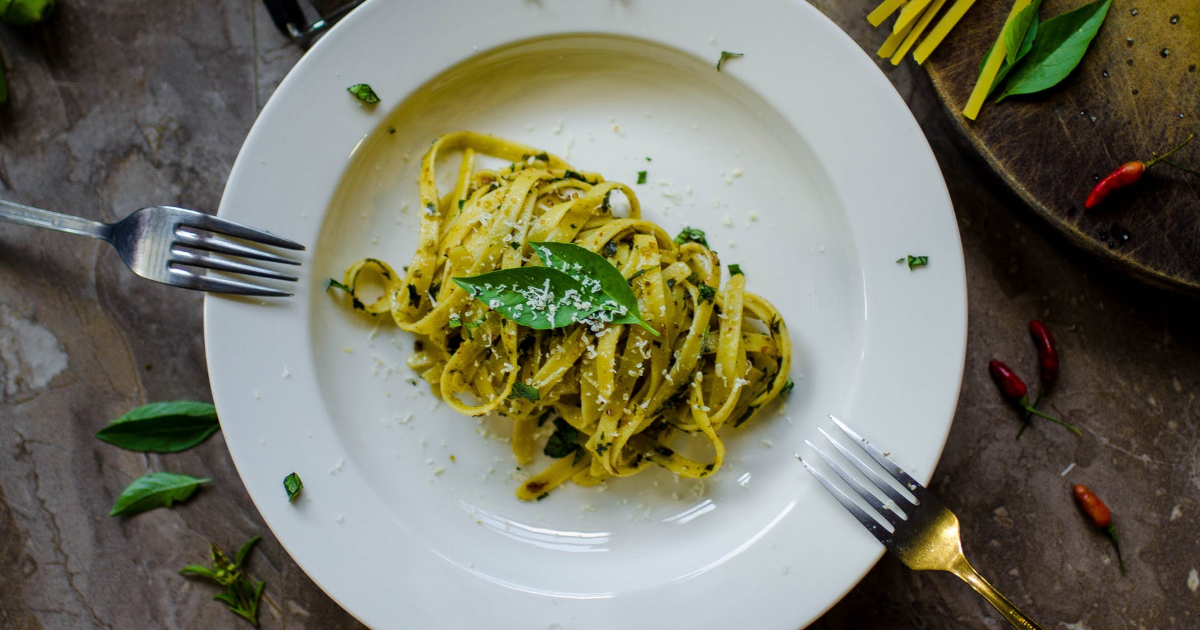 If French cuisine has five basic sauces, which every chef must be able to prepare, then it is only significant that the Italians have their own. And it wouldn’t be Italy if the main task of the sauces was not to complement the delicious pasta meals.

So in this article I’ve collected the 5 best recipes for pasta sauces that everyone should know.

In my other article we’ve found out about all the Types of pasta noodles. Now it’s time to finally get prepared for the whole pasta dish.

Italian cuisine has traditionally made pasta with cheese and butter sauces for a long time, but “Fettuccine Alfredo” became a popular dish thanks to an Italian chef only in the early 20th century. The principle for this meal is quite simple – egg noodles are mixed with butter and Parmesan cheese.

First, melt the butter in a small saucepan over low heat – it should be sunny yellow. Then add the cream kept at room temperature to the butter, add salt and pepper, and stir everything. Allow the cream and butter to begin to bubble slightly. Then allow the sauce to thicken. It usually takes about 3-5 minutes.

When the sauce base is prepared, remove the pan from the stove. While the ingredients are still hot, mix the grated Parmesan cheese into the cream. Vigorous bags of sauce with a wooden spoon so that the cheese melts evenly and does not lump.

Sauce is done and ready to be enjoyed!

The classic tomato sauce, richly served with pasta dishes, originated in Naples, Italy. However, the most interesting thing is that we know the marinara sauce itself thanks to the American Italians, who introduced it in traditional Italian cuisine. This sauce is quite rich in flavors for many pasta dishes, which is why it is worth preparing at home.

The principle is quite simple – boil tomato sauce at home in a large pan or pot. First place the tomatoes in a bowl and squeezed by hand, adding very little water to release the tomato juice. The squeezed tomatoes are set aside to stand.

Then heat the oil in a pot (do not use a deep one) over medium heat. Fry the crushed garlic cloves and onion in it. As soon as the garlic squeaks in oil and is still in its usual color, add the tomatoes with all the juice. Add bay leaf and fresh basil, as well as salt to taste and chopped olives. The sauce is soaked for 15-20 minutes, it should be orange, thickened and the oil should flow over it.

Before the sauce is almost ready, check how it tastes – if necessary add more salt, basil and oregano to enhance the taste. Then continue to simmer for the same amount of time. The finished sauce can be cooled and transferred to storage jars. Then you can use it for up to two weeks.

Basil pesto – the taste of summer

The easiest way to get the tempting green pesto sauce is to toss all the ingredients in the blender and blend. However this approach will not be the right one either, because the metal blades change the taste of the basil and in the end only a porridge, not a dark sauce, will be made.

When preparing pesto with a pestle, the ingredients should be mixed step by step.

Lovers of classic values who want to make an authentic basil pesto must provide it with the basil  of Genoa, which has the pronounced aroma and taste that is recognized as the most suitable for pesto sauce.

In addition to the real basil, it is important to procure garlic, high quality olive oil (extra virgin), hard cheese, a pinch of salt and, of course, cedar or pine nuts.

First, take basil leaves with a pinch of salt (if the cheese is not very salty) and rub the leaves with a stamp. You will not be able to assemble all the leaves at once, so chop them into parts until all the desired amount of basil is used.

When done, add the cleaned and halved garlic cloves and strain. Then there is a layer of nuts – pour into a pestle and chop together with the green porridge.

The nuts are followed by chopping the cheese – add the sauce and stamp in smaller pieces. Only when all these ingredients are mixed can you slowly pour in the olive oil and squeeze the sauce to the desired thickness.

When using the pestle, be careful not to bother too much, but also keep larger nutcrackers if you want. Also, do not overdo it with the addition of olive oil. Better less than too much, otherwise in the end your pesto will look like oil with greens. Pesto should be thick, dark with noticeable pieces of nuts and a pronounced basil flavor, while also feeling the salty cheese.

According to the Italians themselves – pasta without sauce is not edible. It is not for nothing that we serve them in a variety of flavors with some of the classic sauces, such as pesto, “marinara”, “Alfredo” and others. One of them, created especially for pasta, is a “primavera” sauce, which is not native to Italy, but to Canada.

Over time, however, the recipe has changed and now there is almost a different version in each cookbook. “Primavera” is difficult to call a sauce, because it is mostly butter-soaked vegetables, but this does not mean that it is not worth learning.

First trim the asparagus and cut into small pieces. Ham is also cut into cubes, but the leeks are chopped.

Boil water with salt in a small saucepan, as it is recommended to cook the asparagus pieces in it for at least three minutes. Once the asparagus has been cooked, remove them with a foam spoon and cook the peas in the same water for about 5-6 minutes. After cooking, it is also removed from the field and stored with the asparagus.

Then melt the butter in a large pan with the olive oil over medium heat. Then in a pan saber ham pieces and brown. When done, add the leeks and bake for about 4 minutes. The soft leeks are then poured with sour cream and puff for at least 8 minutes.

At the end of the sauce add peas and asparagus, then stir in the cheese and add salt and pepper. Once the cheese has melted, pour the sauce over the pasta – it will suit “penne”, “rotini”, “fettuccine” and spaghetti.

“Puttanesca”, although considered a relative newcomer to the world of sauces, is a very special sauce. As it is rich in anchovies, its aroma and taste should not be confused with any other.

Even if mostly the sauce is added to spaghetti or some other type of pasta, by skillfully learning how to prepare it, the sauce can even be spread on pizza.

Since “puttanesca” is served with spaghetti or some other type of pasta, it is recommended to cook the sauce a little faster – a moment before the pasta is almost ready. This is necessary so that the pasta does not serve, because they will need to be neatly mixed into the sauce.

The sauce itself begins with frying the chopped onions in olive oil. Then also add anchovy pieces, chili flakes, salt and pepper to taste. Olive oil must be generously applied so that the onion absorbs it beautifully, but the anchovies mix with the other ingredients.

When the anchovies have softened, cut them into smaller pieces in a pan with a spoon. Then add the garlic and cook for another minute.

Then add the canned tomatoes with all the juice to the sauce. Cut tomatoes into smaller pieces right in the pan when they have become softer and hot. Then add the capers and olives, reduce the flame slightly and heat the sauce for 8-10 minutes to allow the excess liquid to evaporate.

Stir in a handful of grated Parmesan cheese. And the sauce is ready to be served!

That’s about all you need to know on how to make TOP 5 pasta sauces!